The problem? She couldn’t make a dent in her entrée. “I played around with the food on my plate to make it look like I was eating,” she says. Her date kept asking if anything was wrong with the food, and she simply said no, she just wasn’t that hungry. He picked a bit off her plate, and she thought she was in the clear.

Not so fast. The waitress, too, was concerned about how much food Dina didn’t eat. “She kept asking questions about why I didn’t like it and wouldn’t let it drop,” recalls a still slightly embarrassed Dina.

After the meal, she told her companion the truth. No, it wasn’t just first-date jitters that left her unable to eat: Dina had undergone gastric banding surgery. As a result, she could no longer consume large volumes of food. After gastric banding, the upper stomach is restricted, so eating more than the new pouch can hold or eating too many calorie-dense foods can cause vomiting, expansion of the pouch, weight gain or even rupture of the stomach.

Not exactly the stuff that first dates are made of.

Her date never called again following her big reveal, but that is probably for the best, as the chemistry wasn’t great anyway. There are many more fish in the sea now, she says.

It’s really a whole new world for Dina, who can’t remember ever weighing less than 200 pounds until now. Her weight plagued her through most of her school years, and she actually transferred schools in sixth grade because she was teased about her weight.

One insult in particular stands out. During gym class, a peer said, “Oh Dina, you can’t do tai kwan do — you have to do fat kwan do.” 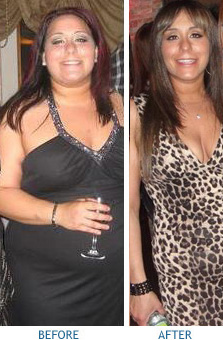 Dina was outgoing, popular, the student council president and the captain of the basketball team, but her weight still cast a shadow over her school years.

“I was always self-conscious and really depressed about my weight,” she says. “It interfered with my friendships.”

But that was then. Now Dina is in “one”derland, the term given to people who undergo weight loss surgery and finally weigh in the 100s, not 200 or higher.

That’s not to say it has been easy, but Dina has no regrets. More than two years later, a lot has changed for Dina. “I don’t drink anymore because I was doing it too much,” she says, “but I found now I eat a lot more than I did immediately following the surgery.” Instead of a festive glass of wine, mug of beer or cocktail, “I eat and instead of going out to party, I’ll go out to eat.”

Her portions are still small, so this focus on food has not resulted in any weight regain or physical symptoms such as nausea or vomiting.

“When I crave something, I fulfill the urge with a smaller portion than I used to have and am done with it,” she says.

At first the exercise part didn’t go smoothly. Dina joined a gym, but was too self-conscious and cancelled her membership.

But that was then. Dina is more active now than ever before. She plays on a coed softball team. “I love it and I am so much more confident playing since I am thinner,” she says. “I’m still not in the best of shape, but I can keep up and I’m actually one of the better girls on my team.”

And this new sense of confidence permeates into other aspects of her life. “I notice myself doing things I wouldn’t think to do before,” she says. Take sitting on the train, for example. “I was always so self-conscious being on the train because I felt like I was taking up so much room, but now I don’t even care.”

That’s not to say that everything is rosy since her surgery. “I have what I like to call ‘Fat Girl Syndrome,'” where my self-esteem is still so low,” she says. “If I see a really good looking guy, I probably still wouldn’t talk to him because I wouldn’t think I had a shot.”

Dina is having some difficulty adjusting to her new size. “I can look at my old pictures 1,000 times a day, but in my eyes I’m still the same 238-pound Dina,” she says. “I’ve started seeing a therapist to try and boost my self-esteem.”

It may be paying off. Dina has been dating someone for the past few months, and so far so good. He is even comfortable when she can’t finish her entrée.