A new surgery-free medical device called the EndoBarrier Gastrointestinal Liner may offer the benefits of weight loss surgery – minus the surgery.

Bariatric surgery is an effective way to lose weight, maintain that weight loss and potentially help decrease the risk of diseases associated with obesity. Still just one percent of obese people who are eligible for weight loss surgery go under the knife.

Why? Their individual reasons may vary, but some consider weight loss surgery to be too risky and radical.

For these individuals, bariatric surgeons may have a new trick up their sleeve — an endoluminal one called the EndoBarrier Gastrointestinal Liner. This new incisionless bariatric surgery is a device being developed by GI Dynamics.

The EndoBarrier Gastrointestinal Liner is implanted and removed through the mouth without surgery. As such, it is part of a growing movement toward incision-free weight loss surgery. The device lines the upper part of small intestine. It the duodenum and the first part of the jejunum. This mechanical bypass may alter hormonal responses in the body, which result in metabolic changes that lead to weight loss and a potential solution for type 2 diabetes.

While some individuals may opt for the EndoBarrier as their sole method of weight loss, others may use it as a presurgical weight loss tool. In this scenario, the liner is used prior to weight loss surgery such as gastric bypass, gastric banding, duodenal switch or gastric sleeve. This may make the second, more radical surgery that much safer. The heavier you are, the more risky surgery can be.

How Much Weight Loss?

Studies have shown that people who had the EndoBarrier implanted lost 20 percent of their excess weight within three months, and 30 percent of excess weight within six months. What’s more, adding a flow restrictor to the EndoBarrier can actually double the amount of weight loss, according to a 12-week study presented at the 26th annual meeting of the American Society for Metabolic & Bariatric Surgery in Grapevine, Texas. A flow restrictor is an adjustable restriction at the outlet of the stomach that slows the speed at which food leaves the stomach. It can be dilated if it is too small.

Like gastric bypass, the new EndoBarrier may help reverse diabetes. A study in the December 2008 issue of Obesity found that obese and diabetic rats, raised on a high-fat diet and given the sleeve, consumed 30 percent less of that diet and lost 20 percent more weight than rats that did not receive the device. After 16 weeks, the fasting blood glucose levels, insulin levels and oral glucose tolerance of all rats with the sleeve returned to normal levels.

The exact nature of the link between the EndoBarrier and diabetes risk is not known; however, it is believed it may alter the activation or levels of hormones that originate in the intestine. Hormones such as insulin are known to play a role in diabetes. 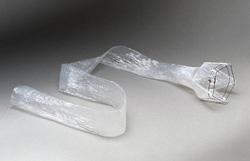 The outpatient procedure takes roughly 30 minutes to perform. The liner is typically removed after three months. Ongoing studies are looking at the safety and efficacy of keeping the EndoBarrier in place for six months. EndoBarrier removal takes approximately 15 minutes.

You will likely experience some discomfort during the first week after the EndoBarrier is placed in the small intestine. If you eat too much, you may vomit.

So far, studies of the endoluminal sleeve do not show an increased risk of dumping syndrome. Dumping syndrome occurs when the undigested stomach contents are “dumped” into your small intestine too quickly. It is marked by abdominal cramps and nausea.

A multidisciplinary program consisting of diet, exercise and behavior modification may help maximize the results. For those with type 2 diabetes, a close look at blood sugar levels before, during and after the EndoBarrier treatment is also recommended.

Currently, the EndoBarrier Gastrointestinal Liner is only available as part of clinical trials. It has been studied in more than 250 patients. GI Dynamics is currently conducting clinical trials in South America and Europe, and plans to begin their next U.S.-based study in 2010. Interested individuals can visit the company website for updates and information about upcoming trials.

GI Dynamics will make the product available in the U.S. upon FDA approval. The price of the procedure has yet to be determined. GI Dynamics believes that in the U.S., the EndoBarrier will be priced at roughly half the cost of Lap Band and a quarter of the cost of gastric bypass.

About the Reviewer of This Article

Keith S. Gersin, MD, FACS, is Chief of Bariatric Surgery at Carolinas Medical Center. Dr. Gersin has completed a fellowship in laparoscopic surgery and flexible endoscopy. He specializes in laparoscopic bypass and laparoscopic adjustable gastric banding. Dr. Gersin is a member of the American Society for Metabolic and Bariatric Surgery (ASMBS), the Society of American Gastrointestinal and Endoscopic Surgeons (SAGES) and is a fellow of the American College of Surgeons (FACS). Dr. Gersin serves on numerous national committees, has published in many scientific journals and lectures nationally on weight loss surgery. He earned his M.D. from Georgetown University and completed his residency at Berkshire Medical Center in Pittsfield, Massachusetts, and his fellowship at The Cleveland Clinic. Dr. Gersin is board certified in general surgery.