As the number of people having bariatric surgery grows, more and more women of childbearing age will undergo such surgeries. Is it safe or even feasible to become pregnant after weight loss surgery? If so, how long should you wait? Are there any precautions you should take to ensure a healthy pregnancy and delivery after gastric bypass, gastric banding or other bariatric surgery?

Morbidly obese pregnant women are more likely to experience pregnancy-related complications, including gestational diabetes, hypertension, preeclampsia (high blood pressure, fluid buildup in the body and protein in the urine during pregnancy) and fetal distress. And they are more likely to require a cesarean or C-section delivery.

Pregnancy After Bariatric Surgery Is a New Trend 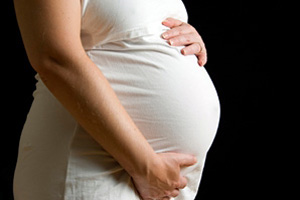 Diet, exercise and medications are not always effective at producing or maintaining weight loss among people who are severely obese, so growing numbers of these women are turning to bariatric surgery.

The incidence of bariatric surgery in the United States increased by 800 percent between 1998 and 2005. Women of reproductive age (18 to 45) accounted for 83 percent of these weight loss surgeries. Between 2003 and 2005, more than 50,000 women in this age group underwent inpatient bariatric surgery procedures each year.

The bottom line? Almost half of all women who undergo bariatric surgery are of reproductive age.

Women of childbearing age who wish to become pregnant after gastric bypass surgery or other malabsorptiove surgeries such as the duodenal switch procedure should wait 18 months, because this is when the rapid weight loss occurs.

It can be challenging to meet nutritional needs during this time without the added concerns of pregnancy. Such rapid weight loss may deprive a developing fetus of the nutrients it needs to grow and thrive.

Gastric banding with Lap-Band or the Realize Band induces more gradual weight loss and does not cause any nutritional issues. Women who get banded should wait about six months before becoming pregnant so they will be at a healthy weight during pregnancy.

Most surgeons advise that women of childbearing age who undergo bariatric surgeries use reliable contraception during the waiting period. As the unwanted pounds come off, pregnancy can become a very real possibility. Women who are overweight or obese may have difficulty getting pregnant, but weight loss increases fertility. In fact, infertility issues linked to obesity are often resolved as hormones return to more natural levels. Be careful.

Pregnancy After Bariatric Surgery Is Safer than Getting Pregnant While Obese

While early reports of women who became pregnant after weight loss surgery suggested a risk of complications — bleeding in the mother-to-be’s stomach or intestines, anemia (iron-poor blood) and restricted growth of the baby in the uterus — the most recent studies are far more reassuring.

Weight loss surgery may actually help protect formerly obese women and their babies from complications including:

Becoming pregnant after bariatric surgery is actually less risky than becoming pregnant while still obese. The latest review of 75 studies found that rates of adverse outcomes for pregnant women and newborn babies may be lower after bariatric surgery, when compared with pregnant women who are still obese. This study appears in the Nov. 19, 2008 issue of the Journal of the American Medical Association.

Women who had bariatric surgery also gained less weight during their pregnancy than did their counterparts who did not undergo weight loss surgery. Too much weight gain during pregnancy is risky for mother and baby.

Will You Need a C-Section?

While a C-section is a relatively safe way to deliver a baby, it does carry more risks than vaginal delivery. A C-section is a surgery that involves delivering the baby through a surgical opening in the lower belly area.

There is no medical reason that women who have become pregnant after bariatric surgery should require a C-section delivery, but they do seem to be more likely to deliver via C-section. Talk to your obstetrician about your chances of needing a C-section delivery as well as your preferences for delivering your baby.

Will Pregnancy After Bariatric Surgery Affect Your Baby?

Newborn outcomes such as premature delivery, low birth weight and fetal macrosomia (a birth weight equal to or greater than the 90th percentile for a given gestational age) were similar, or better, after gastric banding, when compared with newborns of obese women who did not undergo gastric banding.

There were no differences in these newborn outcomes after gastric bypass surgery when compared with newborns of moms who were not obese.

The key to a healthy pregnancy is paying careful attention to your post-weight loss surgery nutrition. Nutritional needs do differ based on many factors, including what type of bariatric surgery you have. For example, gastric banding or gastric bypass pose minimal, if any, risks for nutrient problems if the mom-to-be adheres to her surgeon’s advice.

But about 20 percent of pregnant women who undergo biliopancreatic diversion may need to be feed intravenously while pregnant to make sure they receive the proper nutrition. During this surgery, the intestines are re-routed, which can result in malabsorption and deficiencies of many vital nutrients.Gastric bypass is also a malabsorptive type of bariatric surgery, but it does not seem to increase the risk of needing IV nutrition while pregnant.

Please make your obstetrician aware of the type of bariatric surgery that you had and be in contact with your bariatric surgeon during your pregnancy to make sure you and your baby are getting proper nutrition.

There are no recommendations about how much of specific nutrients women who get pregnant after bariatric surgery should consume each day. Talk to your surgeon about your needs. He or she may refer you to a registered dietician to help make sure you are getting proper nutrition during pregnancy. Women who have had gastric banding have the same nutritional requirements as women who have not had gastric banding. Women who have had malabsorptive weight loss surgery such as gastric bypass or biliopancreatic diversion may need regular blood tests to check for nutrient deficiencies during pregnancy.

Women who become pregnant after bariatric surgery need to make sure they are getting enough of the following nutrients:

Prenatal vitamins are an important part of a healthy pregnancy and contain many, if not all, of these essential nutrients. Women should start taking prenatal vitamins before they even become pregnant.

Gastric banding surgery is adjustable. The band can even be deflated during pregnancy. Some women who are pregnant require deflation of the band due to severe nausea and vomiting, which can occur during pregnancy and as a result of gastric banding. This is typically an individual decision.

Keep your bariatric surgeon in the loop. If you are having severe morning sickness, he or she may deflate the band so you can feel better.

Your surgeon can also loosen your band so you can eat more. That said, many women don’t have to touch their band at all during pregnancy.

Women who have undergone gastric banding before pregnancy may have trouble tolerating often horse-sized prenatal vitamins. They may develop heartburn or the prenatal vitamin may remain in their esophagus where it can cause ulcers. Talk to your obstetrician about chewable or liquid prenatal vitamins to avoid these unpleasant scenarios.

Singer Carnie Wilson became pregnant after undergoing gastric bypass surgery in 1999. She eventually started regaining some of the weight that she had lost and ended up trying to shed pounds publicly on the reality show Celebrity Fit Club.

Will you regain weight you lost if you become pregnant after bariatric surgery? Not necessarily, but you must be mindful about your food choices and how much you are eating.

All women should avoid excessive weight gain during pregnancy, including those who have had weight loss surgery. Gaining 40 pounds or more during pregnancy nearly doubles the risk of having a baby who weighs nine pounds or more, which increases the health risks to mother and baby, according to a study reported in the November 2008 issue of Obstetrics & Gynecology.

The best way to avoid excessive weight gain is to eat a healthy diet during pregnancy. Discuss your diet with a registered dietician (RD) who can help you develop healthy eating plans that will keep you on the right track. Food aversions, nausea as well as rabid hunger can make eating a healthful diet challenging during pregnancy, but an RD can help you trouble-shoot some of these issues.

Regular exercise, provided your obstetrician gives you the all-clear, can also help keep your weight on track during your pregnancy.

Most pregnant women have some weight to lose after they have a baby. Women who become pregnant after bariatric surgery are no exception. Working with a dietician and exercising regularly will help shed postpartum weight and get you back to your pre-pregnancy figure, but it takes time. It is important you eat a healthy diet and adequate amounts of essential vitamins and minerals — especially if you are breastfeeding.

Women who become pregnant after bariatric surgery can still breastfeed, provided there are continued nutritional monitoring and supplementation. Talk to your surgeon, obstetrician, a lactation consultant and/or a registered dietician to make sure you and your baby are getting all the nutrition you need. It’s also important to make sure you are drinking enough water so your milk does not dry up.