It’s been slightly more than a year since Dr. Francesco Rubino performed her gastric sleeve surgery at NewYork-Presbyterian Hospital/Weill Cornell Medical Center and now Mona R., 59 is finally able to buy off of the rack.”

This is a really big deal.

Today the native New Yorker is down about 105 lbs and still shrinking.

“It has been mind-blowing,” she says. During a recent family gathering, relatives who hadn’t seen her since before the surgery were shocked. “They hadn’t seen me in well over a year and when I answered the door, they were like ‘oh my god.'”

Like many people who choose weight loss surgery, Mona has tried many diets. “I have a huge track record,” she says. “I sat down to write my weight loss history and I ran out of paper.”

Growing numbers of insurance companies are paying for gastric sleeve and other bariatric surgeries, but they often have many prerequisites, including a detailed, written record of weight loss attempts. “I was on pins and needles until I got the approval because I was going to have the surgery no matter what,” says Mona. “I was very lucky. I didn’t have to petition. I wrote a very strong letter detailing my weight loss history and why this was a viable choice for me.”

Luckily for her, it worked. Gastric sleeve surgery, a relatively new procedure which involves the removal of about 85 percent of the stomach, can cost upward of $10,000.

She is also lucky to have had the support of her immediate family. “My son was like, ‘Ma, go for it’ and my daughter was like, ‘Do you really need to do this?’ and I said, ‘My knees are killing me, I can’t lose weight any other way, so yes this is what I have to do.'”

All surgeries, including gastric sleeve, do have risks. But for Mona, the benefits outweighed the potential risks. “Living fat is more dangerous than this surgery,” she says. “I was prediabetic, had asthma and my knees were killing me. I wanted to walk up a flight of stairs without huffing and puffing.” 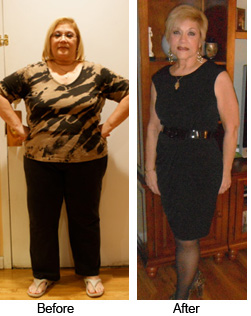 And these wishes have come true. “I no longer need an inhaler, and my knees are better,” she says.

She also has a lot more energy now than she did before she lost all of this weight. Her mother recently had a stroke, and she spends most days helping out. “I do not know how I would have done this over a year ago,” she says. “Before surgery, I could barely drag myself around and everything was an effort.”

Of course, the surgery has changed how she eats, what she eats (and drinks) and how she thinks about food. “I am no longer a volume eater, and that is the greatest thing in the world,” she says.

Mona also used to be an avid wine connoisseur. But no longer. “I can’t drink alcohol anymore,” she says. Prior to having bariatric surgery she was “a huge wine drinker and tequila girl.” But now, she says, “a bottle of Riesling can last me for three meals.”

But she is not complaining. She has no regrets about her decision to have gastric sleeve surgery. In fact, the only thing this native New Yorker does regret is that she waited so long to have the “transformative” weight loss surgery. “I’m sorry that this surgery wasn’t available 15 years ago,” she says. “I would have jumped on it like white on rice. I regret the time, effort and money I spent on fruitless and ineffective plans that were not permanent. I see this as permanent.”